A few months back i randomly came across this beauty of a plank:​ 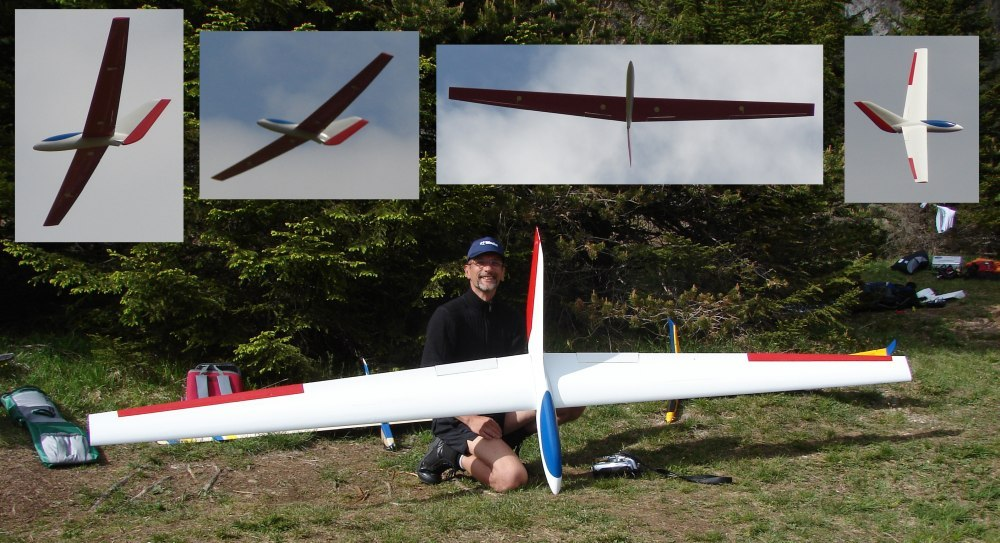 Heres some links to the original model, no longer being made:
http://www.wing-tips.at/Portraet/Modelle/modelle.htm​
http://www.flying-wing.de/rs/katalog/rs_grossegler.html#Pelikan​
​
Nice video of the control surfaces:

So i immediately started a file in inkscape to start planning out how to make this work. Also started tickling the ear of James Hammond who manufactures a lot of popular slope soaring and racing slope soaring planes.

Right away i was nervous as its a pretty thin and narrow wing with a wide wingspan. My plan is a 2 piece wing, so 2x 80″ wings that join in the middle for transport. At 80 inches they are only about 11 inches deep at the root and barely thicker than an inch. This is not much material to keep 80 inches rigied out to the wing tip. Thats a lot of leverage being placed in the center of that wing. So started asking more experienced people about that as well.

As an example here is how the plane will compare to my 5’11 height: 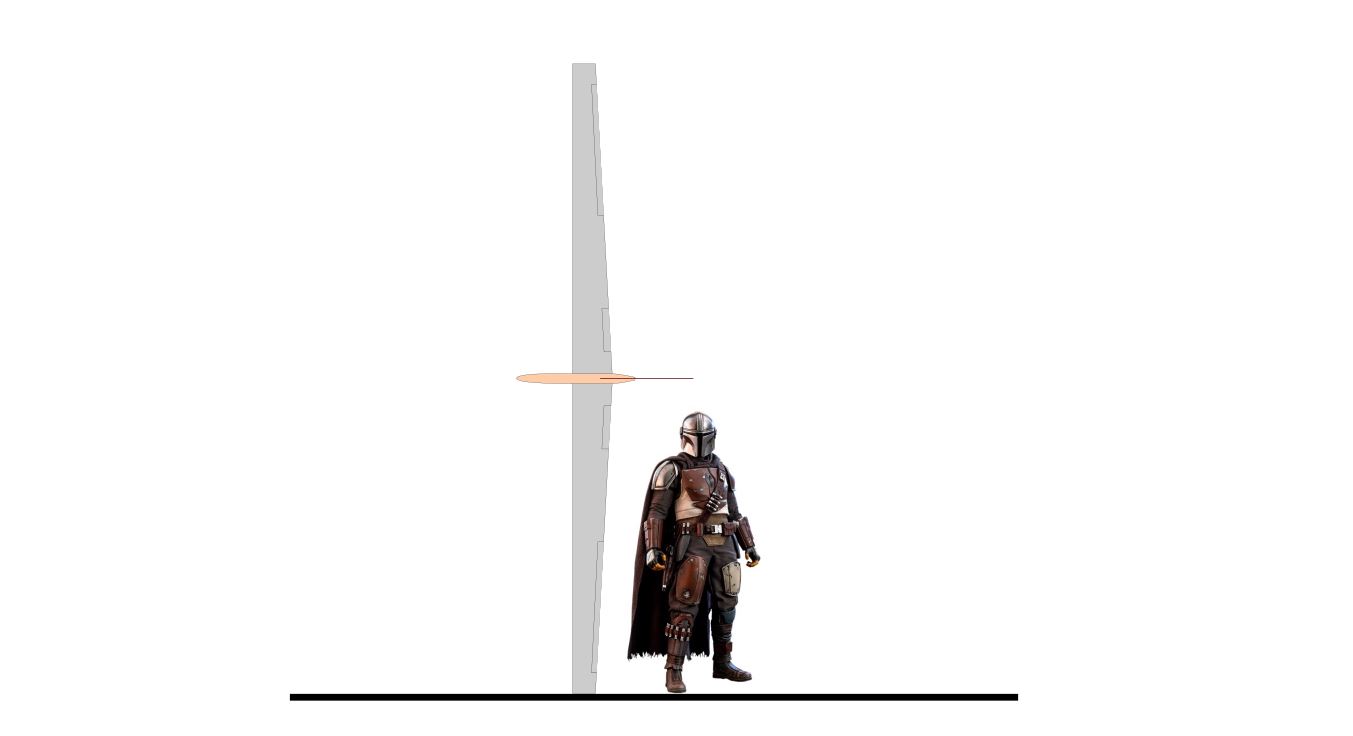 Ill save the back and forth and just get to the end plan that i decided on. Just wanted to say that this was not entirely me coming up with this, more like listening to the experts and just choosing which path to take.

The wings will be blue high density foam vacuum bagged with epoxy and fiberglass. I am choosing to go with 4oz S-glass. S-glass is stronger and stiffer than standard e-glass by 25-30% but a lot people don’t know that it is also stronger than carbon fiber while also at a significantly cheaper price. Carbon of the same weight cloth would be stiffer and lighter, but would break well before the fiberglass would.

While it will have an internal spar, this is mainly to hold the wing joining tube. The strength of the wing will come from overlapping fiberglass layers. So while on the wingtips it will have 2 layers of 4oz (8oz total) in the center area it will get up to 20oz total. Here’s a diagram of my current layup plan: 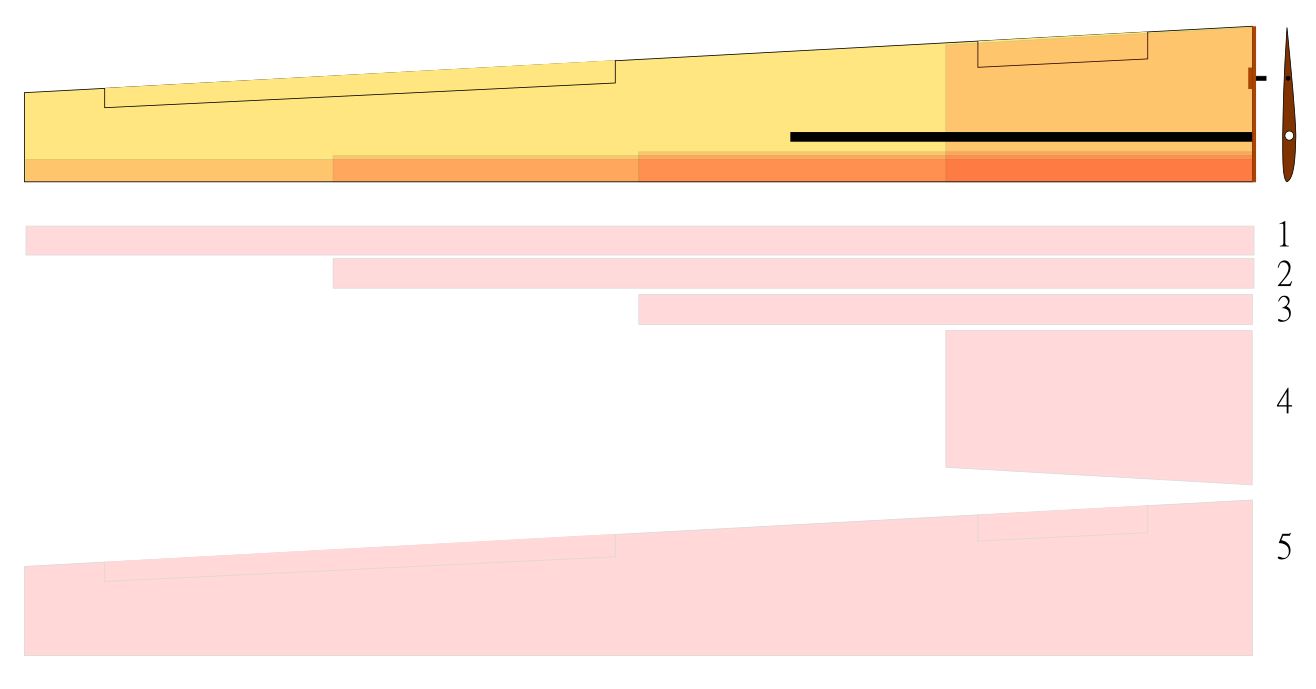 In the above picture i show the different layers. One thing to note is that parts 1-4 will be twice as deep as in the picture as the wrap around the top and bottom layers the same amount. Every 25% of the leading edge another layer is added. Than after all those layers are added the final piece, 5, is added which covers the entire wing surface top and bottom tying everything together. The Center of gravity, at least in the center of the wing, will be within that leading edge thick layer of fiberglass.

Also in the picture is the Mandrel wound carbon fiber tube that will go 30″ up into each wing and hold the joining tube. The inside of the root will be a piece of plywood. Also drawn is a peg to keep the wings from rotating.

The control surfaces are actually 2 elevators on the inside and Ailerons on the outer parts of the wings, not elevons as you normally see on planks/wings. This will allow things like crow braking if i want in the future.

The fuselage, at this point in time, is going to be a gifted fuselage from a rcgroups member. He has fuselage from a big xplorer sail plane that broke behind the wing saddle. This will work well enough as i don’t need the tail boom at all.

The reality of physically cutting the wing and shipping it via usps means that some things have to change. After some back and forth here is the cut plan i decided on with the same guy that cut my booby planks: 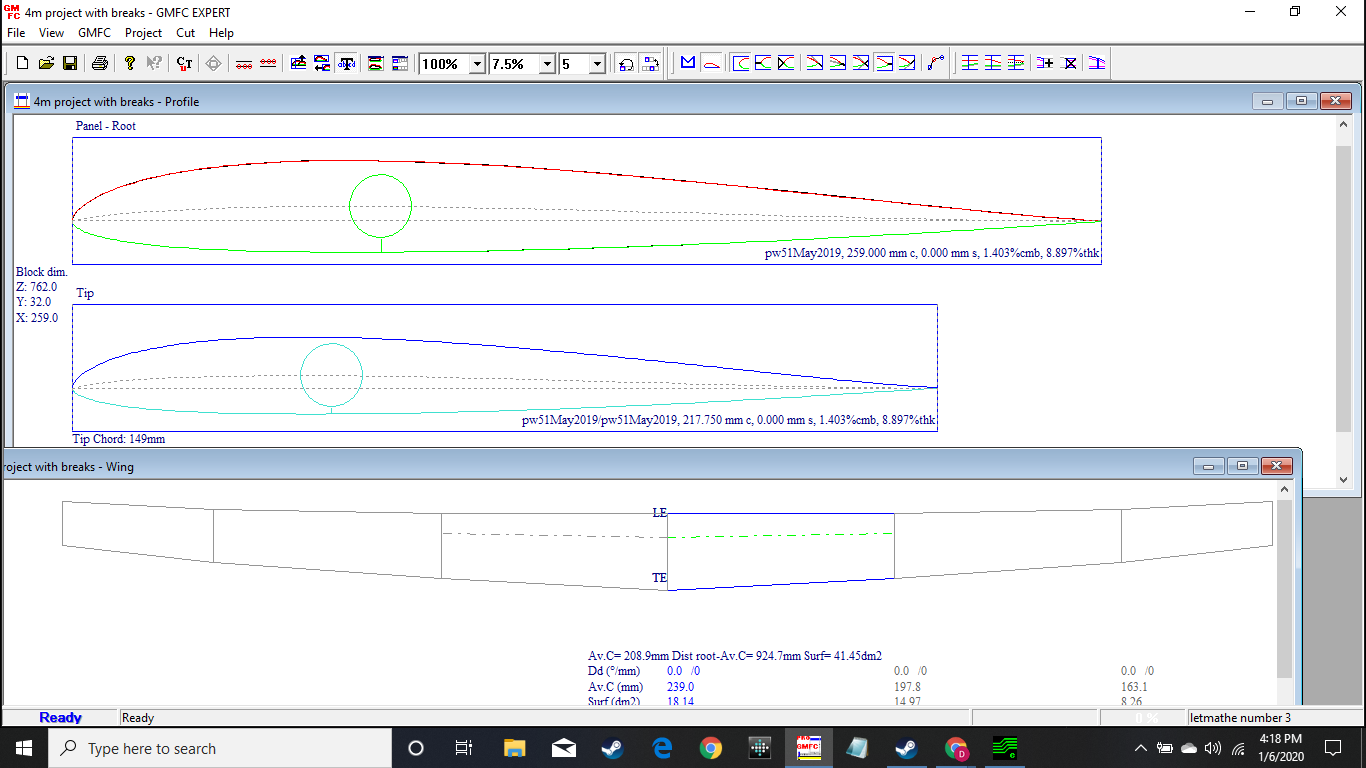 PW51 airfoil with the internal spars cut already.
Each core will be cut in 3 sections. 2x 30 inch sections and the wingtips in 20″. I will manually add the sweep back on the wingtips and sand to match the airfoil later.

Instead of a constant sweep back the center will have a straight leading edge. This will allow the spar to be straight across the join. Than the outer 30″ section will sweep about 11mm and the wingtip another 29mm. If you have watched any cockpit views of full scale high performance gliders it actually is pretty similar, the broken section look.

The build will continue over in the flitetest forums here:
https://forum.flitetest.com/index.php?threads/4-meter-plank-build-thread.61551/